From Mind-Bending To Mind-Blowing: Biofuel Stories of 2012

Sometimes the biofuels world is just truly bizarre. At other times, it’s too cool for words. The biofuels stories which cross my desk sometimes seem like they belong in a science fiction novel, at others like they should be in a horror movie. For example, in 2009 we had the Beverely Hills plastic surgeon who wanted to turn human fat into biodiesel.

Looking at the last year in retrospect, here are a few highlights from 2012:

From the “Teacher Tinkering With algae, Discovers Secret” Dept: we have; a 10th. grade teacher spies some algae in Yellowstone National Park and scoops some up to try and grow algae biofuels. Along with it, he scoops up a fungus as well. He then discovers the fungus likes feeding on the algae, getting in the way of growing the algae. Curious, he dries it out and finds it “oozes oil.” Further research finds that the secreted oil is perfect for biofuels, taking algae based biofuels in a totally new direction…or is it? Fungus biofuels, anyone? 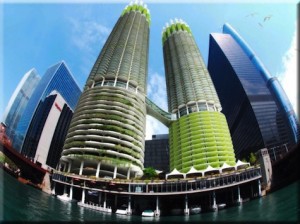 From the “It’s Just Too Cool For Words” Dept: If some of the talented designers at The Algae Competion had their way,  at Marina City in Chicago, you can expect to see buildings are covered with photosynthetic skins and vertical gardens, collecting the sun’s energy from the outside and producing food and energy for urban citizens on the inside. They want to  green desert coastlines and produce food for millions of people. They want to create algae building systems that recycle polluting wastes into high value animal food, fuel and biofertilizers.  If building with algae ever catches on, and I think it will, this is a whole new world in architecture.

From The “It Sounds Like Science Fiction” Dept: Engineering Magnetic Algae. Conversion of algae to biofuels requires dewatering before extracting usable products—a daunting task since the mass of water in a growth pond exceeds that of the algae by 999 to one. Recently, LANL physicists and bioscientists genetically engineered magnetic algae to investigate a novel harvesting method: pulling algae from the water with a magnet.

From the “Coolest Home Grown Design” Dept: The Skylight Harvest algae production system.We have another entry from The Algae Competition, from Lauren Benstead. Utilizes rooftop space incorporating solar panels, rainwater recycling, filtration station, fold-out drying screens, and a small pump system that agitates the growing algae. Highly adaptable due to its size and structural design, and offers the benefits of algaculture to everyone, everywhere. I expect to see more and more of in-house, as well as small scale designs in 2013.

From the “Brightest Kid On The Block” Dept: We have Josh Wolf. Josh is a 10th grade student at Elk River High School. He devised a way, using recycled parts, of basically creating a new type of bioreactor. Using Red, Blue and Green LED’s and utilizing alga’s night cycle, an ingenious method of enhancing algae growth. In addition, he designed a low cost solar drying method as well as completely solar open pond design.

For 2012, the algae world exploded with new designs,  new technologies, new strains, new uses, and best of all, new ideas. What 2012 has taught us is that there is seemingly no end to the uses we can employ algae in. Governments, multinational oil companies, airlines, the Navy, small business, and most of all, talented people all over the world have jumped on the algae train. And this, is just the beginning. Hold on, 2013 is going to be an even better ride.