Later this month if all goes as planned, Renewed World Energies (RWE), an alternative energy development company based in Georgetown, S.C., will throw the switch on what it claims will be the world’s first commercially-viable, closed system, automated microalgae production facility in Forsite Development’s ReVenture ‘eco-industrial’ park.

RWE said its “Algae Photo Bioreactor” can be a source of affordable biofuel by turning algae into transportation fuel as well as biomass feedstock and other commercial uses. The firm said it will deploy its technology as part of the closed-loop waste integration system used by tenants of ReVenture Park, the former 667-acre Superfund site along the Catawba River.

is now operational. Construction of this first phase, which began on June 1, 2011, was completed on time and on budget. When completed, the facility will produce 1.5 million gallons per year of crude oil and consist of approximately 300 acres of algae cultivation ponds and processing facilities. By reaching this key milestone, Sapphire Energy is on target to make algae-based Green Crude a viable alternative fuel solution capable of significantly reducing the nation’s need for foreign crude oil, which will serve as the blueprint for scalable algae biofuel facilities globally.

As of today, Phase One of the project has reached the following milestones:

In building the Green Crude Farm:

[Editor’s note: Because this is a press release, it should be taken with a grain of salt.] 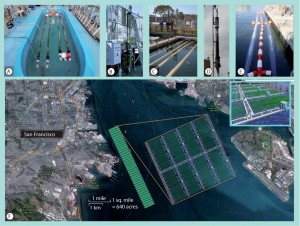 How and where it will be possible to produce bio fuels at a scale that can compete with fossil fuels, without competing with agriculture for water, fertilizer and land, is a fundamental unanswered question.

We propose that the answer could be offshore membrane enclosures for growing algae. Micro-algae are the fastest growing biomass and best oil producers known; by cultivating microalgae offshore using waste water as a source of water and nutrients in floating photo bioreactors (PBRs), the system would not compete with agriculture.

Furthermore, freshwater microalgae clean the wastewater, capture CO2 and, if they accidentally escape, they cannot become invasive species because they cannot thrive in seawater. The seawater supports the PBRs, controls temperature and can be used for forward osmosis to concentrate nutrients and facilitate harvesting.

The wastewater from Tulare County dairy operations may soon be used to power jets zooming overhead thanks to a brand new facility converting moist algae into biofuel.

Recently, the City of Tulare leased four acres next to its large wastewater treatment plant for the operation, which will use CO2 and other gases generated from the site’s adjacent fuel cells to grow the algae in large tubs of water.

The lipids, or oils, the algae produces as it grows can then be extracted and refined for use as a low emitting jet fuel.

According to Pacific Oil’s CEO David Gair, the facility is currently in a pilot-scale phase, with the capacity to produce around a half a million gallons of the fuel annually.

But given the right equipment and enough gases, he said, as much as 6 million gallons a year could be pumped out each year.

“I would like to give it 30 days before we get a commercial project underway,” said Gair, who started Pacific Oil Products in 2008 selling presses and other equipment to extract plant oils. “To use all our resources will take until the end of the year in order to get centrifuges, oil presses, ponds, green houses.”

A study last year by the Department of Energy’s Pacific Northwest National Laboratory found that American-grown algae can produce 21 billion gallons of algal oil by 2022 consistent with the advanced biofuels goal set out by the Energy Independence and Security Act of 2007.

facility, is now operational. Construction of this first phase, which began on June 1, 2011, was completed on time and on budget. When completed, the facility will produce 1.5 million gallons per year of crude oil and consist of approximately 300 acres of algae cultivation ponds and processing facilities. By reaching this key milestone, Sapphire Energy is on target to make algae-based Green Crude a viable alternative fuel solution capable of significantly reducing the nation’s need for foreign crude oil, which will serve as the blueprint for scalable algae biofuel facilities globally.

A new survey of the algae industry conducted by the Algae Biomass Organization (ABO) shows algae companies are increasing production in 2012, they expect to be price-competitive with petroleum fuels by 2020, and that stable and effective Federal policy would accelerate production and job creation.

The survey of more than 380 algae industry contacts shows a rapidly growing sector: 65 percent of algae producers said they plan to expand capacity in 2012 as they work to provide the U.S with new sources of sustainable, domestically produced fuels.

AFS BioOil announced that initial tests conducted by the company since startup of the system confirm that production costs of biodiesel will be in the range of $2 per gallon when produced in a commercial system of 1 millon gallons/yr and greater.

AFS BioOil was formed in 2010 as a spin out of Algae Floating Systems, Inc. The company is focused to use AFS technologies to produce traditional biodiesel via the transesterification of algae oil. The strategic goal of the company is to become a major algae biodiesel supplier.

The world’s first industrial plant producing biofuels from seaweed will be built in the northeastern Brazilian state of Pernambuco in late 2013, the official in charge of the project said Thursday.
The factory to be set up by Austrian firm SAT on a sugar cane plantation that yields ethanol, will produce 1.2 million liters of algae-based biofuel annually, Rafael Bianchini, head of SAT’s Brazilian subsidiary, told AFP.
Read the full text here:
0

I’m sure many of you remember that algae became a bit of a political football during the Republican primary campaign. It certainly was hard for me and others in the industry to see algae technology belittled. And based on that experience one might be inclined to draw a bright-line and say Democrats are for algae while Republicans are against. (Of course, to do that, one would have to ignore the incredible advocacy of U.S. Rep. Brian Bilbray (R-CA), who co-chairs the House Algae Congress, and other Republicans who have been tireless supporters.)

Brazil will begin next year the industrial production of biodiesel and bioethanol from seaweed.

The first production plant of such biofuels will be built in Pernambuco, in the northeast of the country, following an agreement reached between the company See Algae Technology (SAT), from Austria, and Grupo JB, from Brazil.

The Austrian company will provide the technology and the Brazilian firm will contribute with the site to build the factory in Vitoria de Santo Antao, a town located 53 kilometres from Recife.

The plant and the marine farm of one hectare of genetically modified algae will be installed in the last quarter of 2013 with an investment of BRL 19 million (USD 9.3 million).

In the marine farm algae will be developed in an appropriate environment that will have a system that absorbs sunlight and transmits this solar energy via optical fiber up to closed reactors where algae perform photosynthesis, Xinhua reported.

It will also be possible to take advantage of carbon dioxide (CO2) from the ethanol production to favour photosynthesis and reduce the emissions of polluting gases into the atmosphere.