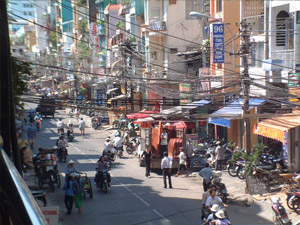 Back in the day I was a teacher in Vietnam. This was in 1995. For the most part in those days, Vietnam was a semi-closed society. Clinton had normalized relations but you would never know it. Most Vietnamese had never known an American. I know this sounds illogical, since Americans fought a war there, but for almost 20 years, the only “round eyes” were Russians.They weren’t too many people left in the 30-40 year old range. The country was like 70% under 20.

Of course, before I left, my family, my friends, all told me not to go. I would be kidnapped, I would be killed, etc. Ironically, it turned out, when people found out I was American they were thrilled. You see, the stories passed down were of the “good old days” and most Americans soldiers were known as kind and generous. The Vietnamese had many more good memories, than bad…at least in the South.

Anyhoo…fast forward 20 years and I’m in one of the most economically crippled countries in the world. Fuel was a big deal. Fuels powers everything, including lights, fans, and transportation. Sit inside a concrete box, with temperature over 100 degrees, and no AC, lights, or fans, and you’ll quickly understand what I mean. I literally sweated off close to 30 pounds.

We had constant power interruptions. Everyday. Sometimes lasting a few minutes, sometimes lasting hours, or days. “Brown out” is too kind of a word, and “black outs” doesn’t really fit either. 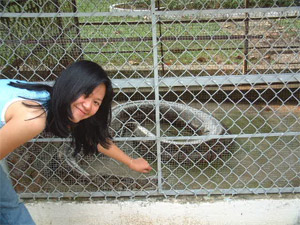 A Python who decided to make our open pond his home.

Maybe the powers-that-be took pity of me, but they went out and bought a generator. This worked for about a day…until they ran out of fuel. I knew I wasn’t going without a fan in my classroom.

I had always been interested in alternative fuels and I remembered from past studies that during World War I and II, they used vegetable oil for diesel.

We collected used vegetable oil from restaurants, and I do mean some really nasty stuff, dark, burned, filled with food chunks, I mean they used that stuff over and over. We used it and figured out how to make diesel fuel out it. The fans came back on.

First people were fine giving it to us, then they saw we were using it to make fuel, that it had value, and that whole idea went out the window.

This is when I started experimenting with pond scum, and growing it in bioreactors.

It’s also when I made the stupidest mistake of my life.

We didn’t have any acrylic tubing, or anything fancy. In fact, we couldn’t have gotten a hold of any if our lives depended on it. We did everything by the seat of our pants, and local materials. One day I got the 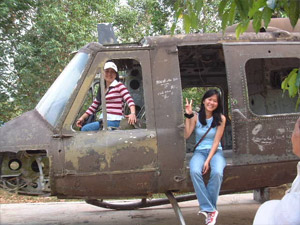 There were still some old downed Huey's left back in the day.

brilliant idea of making a bio reactor out of bamboo. We had some BIG bamboo. (No, not the rolling paper kind, smart ass.) We saw no reason why it shouldn’t work and off we went to the shop and spent 100’s of hours trying to perfect something which would never, ever, work.

You see, we had a little problem of sunlight not penetrating the 3/8 inch bamboo walls. What an idiot.

Now developing countries all over the world, as well almost 100 schools and universities are using the same principles to grow algae biofuels.

You can read about it here. 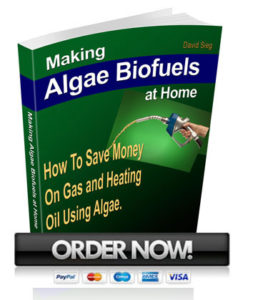 PS…If you want to hear more about my experiences in Vietnam in future editions of this newsletter, I have a 100 stories and about 1000 photos I can share. Let me know by leaving a comment below.

PPS…I’d also like to do a “Questions and Answers” Newsletter. If you have any burning questions you’d like answered about algae biofuels send them to me at dsieg (at)making-biodiesel-books (dot) com

PPPS…Also, the September discount is “Making Algae Biodiesel at Home.” You can save $15 off the regular price of the eBook and $29 off the paperback. FOR 4 DAYS ONLY, by using the discount code on checkout of “SEPTSALE“.(All caps)  Click here for details on this eBook.

I’d love to hear all about your experiences in Vietnam.

Several months ago, I read about an indivdual or company that was selling a kit that had algae tanks and an oil press, with instructions. Know anything about it???

I don’t know who you’re speaking about specifically. I know several people who have them in the works, including myself. I would expect to see home units coming on the market in the next 1-2 years, or sooner.

Considering our one and only Planet is 75% water, growing algae for bio-fuels, food, etc. is a very reasonable idea. We are beginning to process biodiesel out of cotton seed oil. I am definitely interested in keeping track of any alt-fuel projects.
Congratulations:
Eugenio

I would love to hear more of your stories. I have 2.38 acres of farm land and I have a large Aquaponics greenhouse that I would love to power with a algae based fuel if its not to difficult to make. I build Koi ponds for a living too. Our web site is serenitywatergardens.com Thank you. Greg